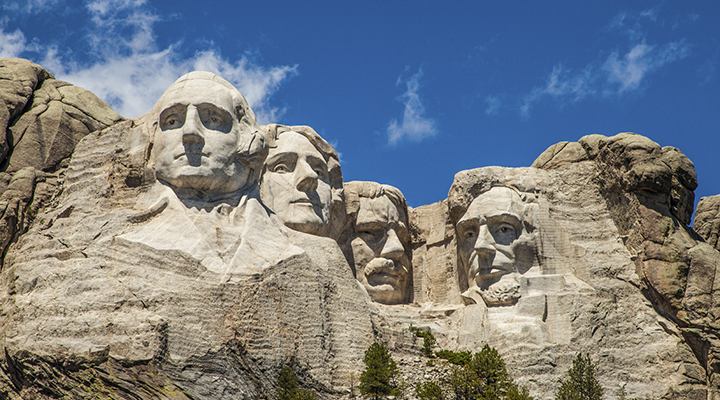 The mountain with presidents’ faces—AKA Mount Rushmore—features four solemn presidential faces, but not one flashes his pearly whites! Surely these fantastic four smiled during their presidency?

Even though you can’t see their teeth, we can still talk about them. Check out these toothy fun facts about our country’s 4 main men:

Contrary to popular lore, George Washington’s dentures were not made of wood. Rather, he sported a number of sets made of various materials, including some made of ivory, brass and gold when he became the first president. Over time, his dentures turned brown due to poor care, and this discoloration may have ignited the wood rumors.

Unlike his mountain neighbor, Thomas Jefferson was known for his excellent dental health. Our Founding Father had an impeccable dental routine, which included brushing regularly with a soft bristle brush, visiting the dentist and using a toothpick.

Perhaps no other president has been better known for his smile than Theodore Roosevelt. Nicknamed the “first smiling president,” Teddy had near-perfect teeth that he loved to show off.

Historians speculate Abraham Lincoln’s teeth were in decent shape, as he was known to maintain a healthy diet and live in areas with naturally fluoridated water. It was probably a good thing Honest Abe had decent chompers — record shows he suffered from dental anxiety and only visited the dentist four times in his lifetime.

Do you have anxiety about visiting the dentist like Abe Lincoln? Click here for resources to help you.