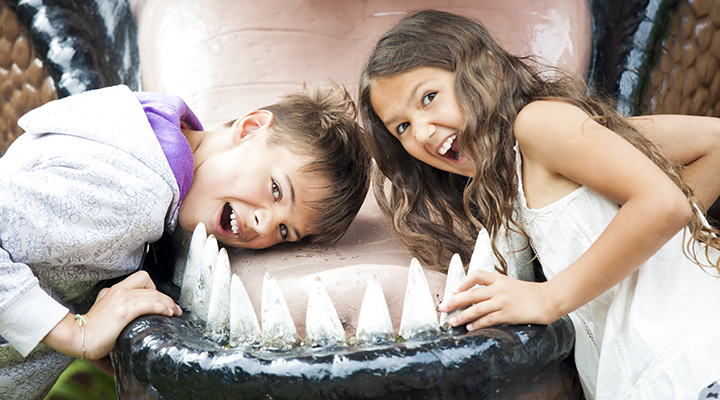 As far back as 200 million years ago, dinosaurs roamed the Black Hills, nestled in the Badlands and called the Great Plains home. Our great state once resembled a scene straight out of Jurassic Park!

Fast-forward to today. South Dakota brings a smile to fossil seekers and dino-lovers alike, but what about the grins of those prehistoric legends that used to call the Mount Rushmore state home?

The average T-Rex had a mouth full of around 50 serrated teeth, each measuring up to 8 inches long. These teeth could easily slice through flesh and bones, allowing this dino to eat up to 500 pounds in one bite.

Two of the largest, most complete, and famous Tyrannosaurus Rex fossils were discovered in South Dakota.

“Sue” was found near the town of Faith in 1990 and can now be viewed at the Field Museum in Chicago. “Stan” can still be seen in South Dakota at the Black Hills Institute in Hill City, not far from where he was discovered in 1987 near the town of Buffalo.

This 3-horned vegetarian used its hundreds of teeth to grind the grass and plants it ate, even swallowing its own teeth for gizzard stones.

The triceratops fossil found in Harding County in 1927, was named the official state fossil in 1989.

While a complete triceratops skeleton has not yet been unearthed, more than 50 skulls have been discovered. Lovers of the distinct dinosaur can view one of those heads at the Museum of Geology in Rapid City.

Woolly mammoths are known best for their long and curved tusks that often reached 8-9 feet long. Scientists can even tell the age of a mammoth by counting the rings on its fossilized tusk – just like a tree! Mammoths also had 4 ridged molar teeth inside its mouth.

In 1974, a large mammoth grave was accidentally discovered outside of Hot Springs by a construction worker. To date, 58 Columbian mammoths and 3 woolly mammoths have been excavated from the site, which is open to the public.

What’s your favorite dinosaur that makes you smile?